Most undergraduates think of the West Stacks as scary or creepy, and it is true most people do not want to spend too much time in the West Stacks, but they are interesting and hold some of the best historical clues about the library. Check out the pictures below.

Weird fact one: The floors of the stacks are not affixed to the walls. They are supported by the book shelves. This makes the stacks impossible to reconfigure. They are always going to be book stacks.

Weird fact two: The West Stacks have eight floors. There is a basement level, ground level, first floor, first A floor, second floor, second A floor, third floor and a fourth floor. The fourth floor is now walled off and houses Special Collections materials. The basement and ground level floors are in Western Historical Manuscripts and are closed off.

When the west stacks were constructed, windows on the north and south walls brought light into the stack area and they must have felt much less claustrophobic.  The north windows were blocked off when the East Addition was erected in 1958 and the "light well" between the West Stacks and the 1915 library building roofed over and turned into mechanical rooms for cooling and heating. When the South Addition was erected, the south windows on the 1 West, 1A West were blocked off, although the actual windows were left in place. From to 2 West up the windows still exist, but carrels and the curtain that the carrels users have put block most of the light.

The windows on the south are easy to locate. Look opposite the south windows and you can make out where the north windows were located.

When the East Addition was erected in 1958, 2A and 3 Central were taken out and a new 3 Central put in that met with 3 East. This meant that the door on 2A West was too low to join 3 Central and 3 West was too high. Flights of stairs were put in to join the West Stacks to the new level. 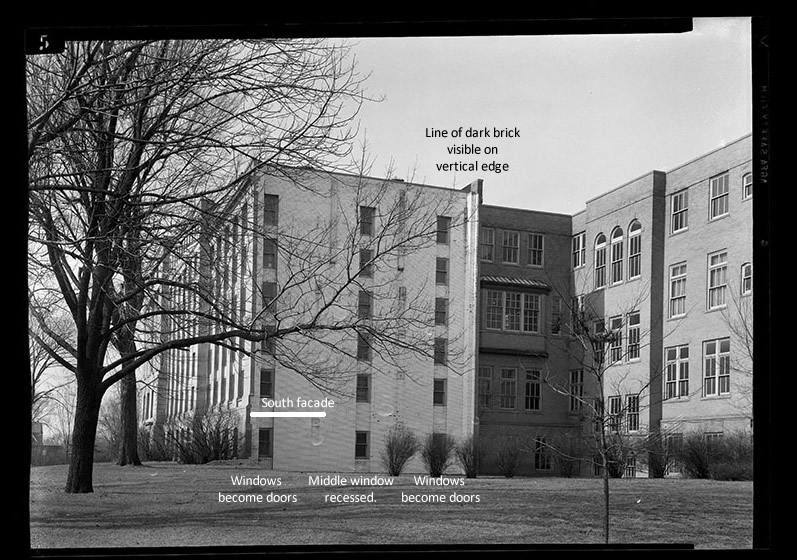 This picture shows the east side of the old Books Stacks. The west side was a copy of the east.

From left to right notice the dark material of south facade against the whitish brick of the stacks. You can see how it forms a thin layer against the brick. Remains of the facade can still be seen in the West Stacks. Next notice the windows. Almost all the north and south windows were turned into doorways. The north ones still remain as doors, but southern ones are now walled up. Next look at the middle row of windows. It is difficult to make out, but you can see that the windows were indented from the rest of the building and the the indentation runs up all the floors. (All three rows of windows are indented.) To the right is the third row of windows. These were turned into the doors. Finally, on the right notice how the wall juts out from the building and that you can see a thin veneer of dark bricks against the whitish bricks on the east face. If you know where to look, you can still this line of bricks from the 1915 Library in the West Stacks. 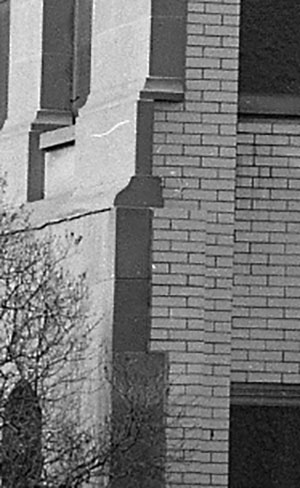 This is an enlargement of the picture above. The picture below shows the same facade in the West Stacks. 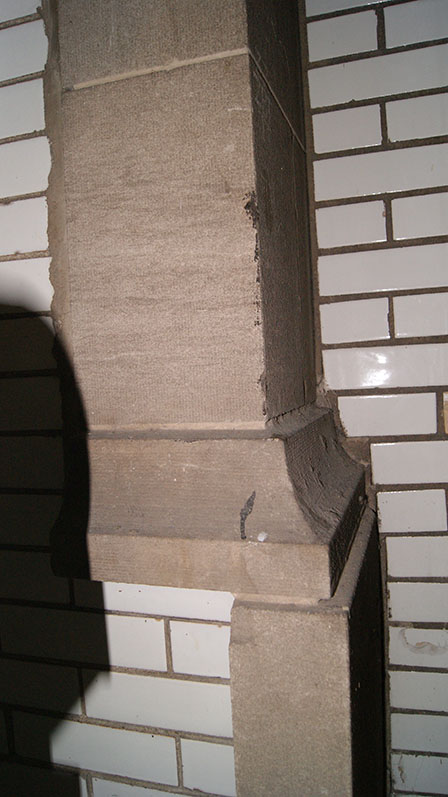 This is picture shows part of the south facade of the old Central Stacks. The West Stacks overlapped the old stacks and encapsulated  a corner of the facade. You can see a remnant of the facade in the southeast corner on every level in the West Stacks. 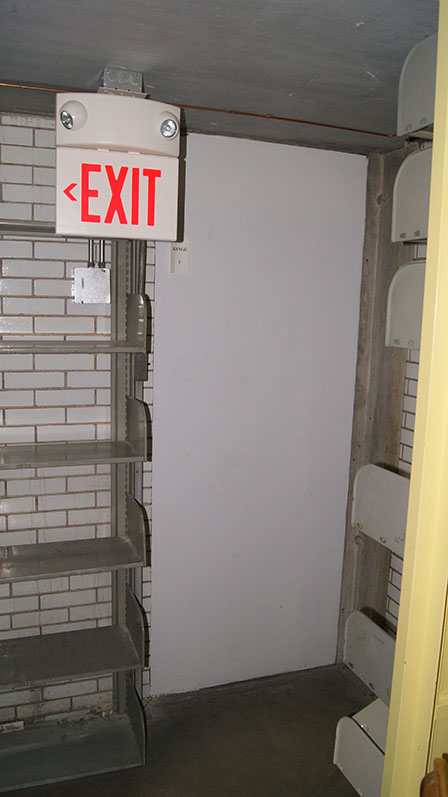 Originally every floor had two doors joining the West Stacks and Central Stacks. At some point, the south doors on all the floors were closed. This is a picture of the walled south door in 1 West.

Outside view of middle windows 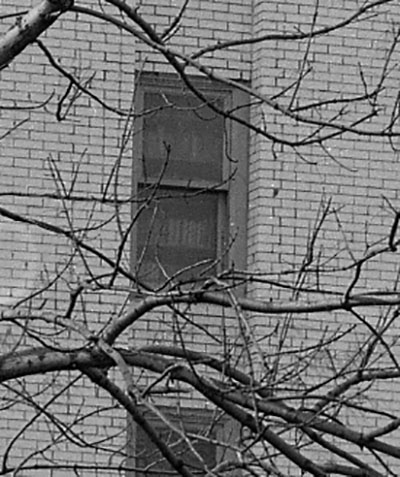 This is an enlargement of the outside picture. You can better see that the windows are recessed. In the West Stacks the recess was left when the windows were walled up. (See the picture below.) 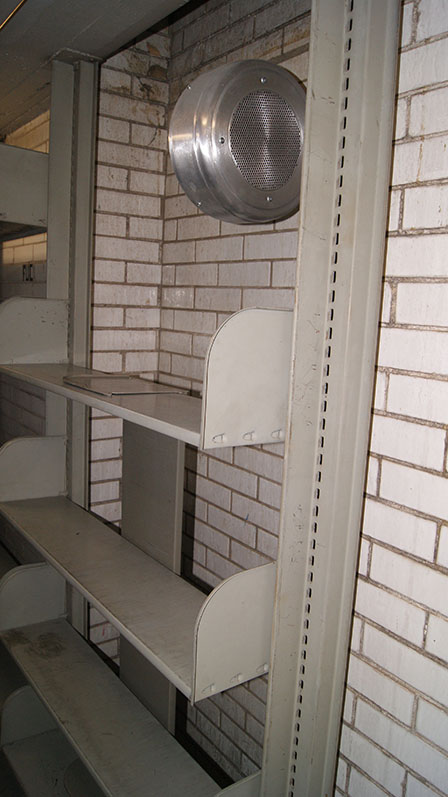 The three rows of windows in the Central Stacks were all set in from the wall. The north and south windows were turned into doors. The middle windows were bricked up. There is no indication of the windows themselves, but the recess where they were forms a large groove that goes up the middle of West Stacks wall.  This is a picture of in on 1 West. 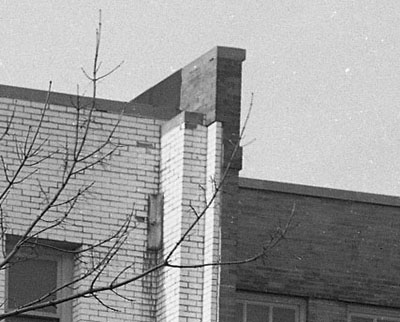 This is an enlargement of the outside photogragh. As you can see, the dark brick that the 1915 Library juts out from the white brick of the stacks. This row of dark bricks is still visible in the West Stacks. (See the picture below.) 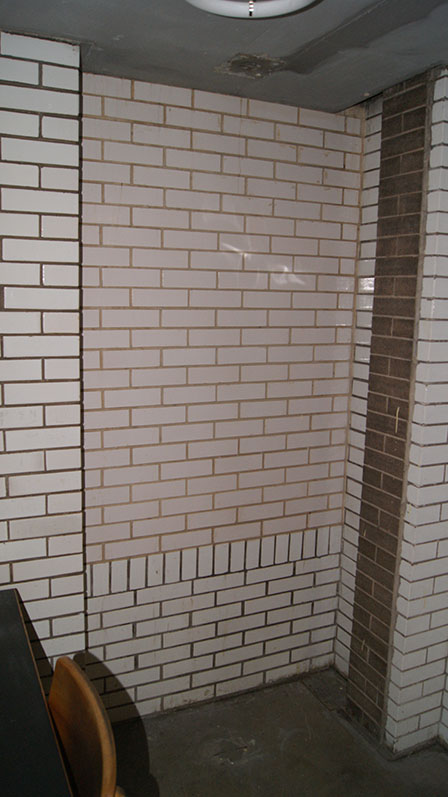 To the left of this brick you see a wall with white tile. Notice how the tile has eight horizontal courses from the floor but then has bricks on end. Above those bricks, the pattern reverts to horizontal courses, but the color of the mortar is lighter colored. The section with lighter colored mortar marks where a window used to be. Directly opposite every south window was a corresponding north window.

Stabilization of the Central Stacks 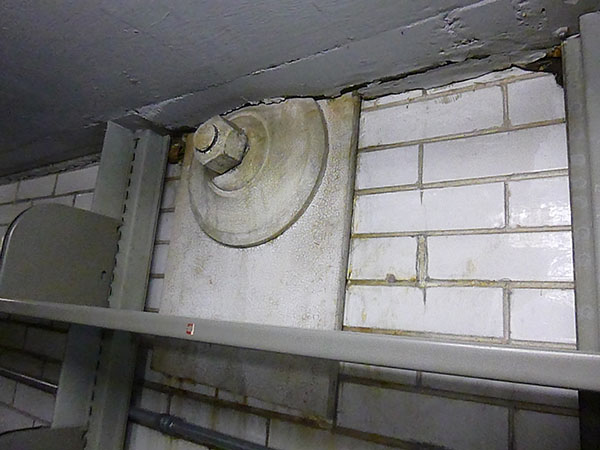 Wall bolts from outside 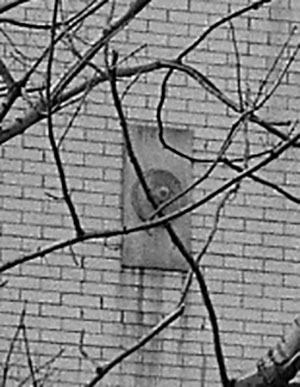 This picture shows the same bolt plates from the outside of the building. 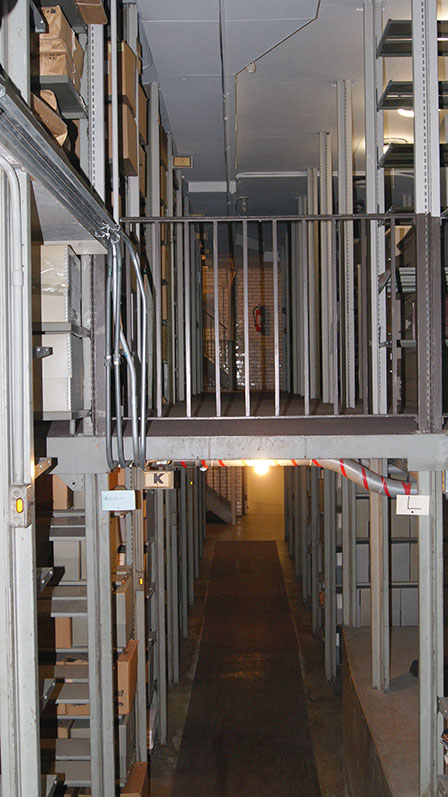 This is a picture of the basement and ground level of the West Stacks. They are used by Western Historical Manuscripts to house some of their collections.