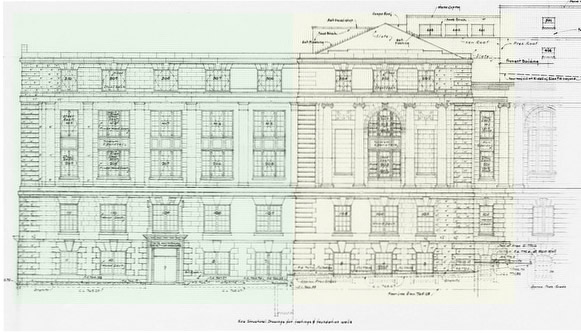 This is architects plan looking south from what is now Lowry Mall. The East Wing's facade copied the West Wing and made the library symmetrical for the first time in 22 years. But by 1958 the needs of the library had grown, so an addition to the East Wing was added pushing the library to Hitt Street on the east. This addition provided much needed stack space and study space for the University library, but also greatly increased the space for the State Historical Society of Missouri. For the first time, the Society was given its own entrances to the building, one on the north side (which you can see in the green area) and another on the east.

The East Wing balanced the north facade, but it did not delineate a functional area the way the West Wing did. The West Wing has a large reading room on the 2nd floor and its large windows were designed to bring light into that room.  The north window of the East Wing looks like it should also bring light into a large room, but it does not. There are only book stacks and study rooms there.

To maximize the stack area, the East Addition has four floors. The first floor is the same height as the first floor in the 1915 library and the fourth floor is at the same height as the fourth floor in the West Addition, about at the roof level of the 1915 library. The second and third floor of the East Addition divided the height of the General Reading Room plus the extra height of the raised 4th floor in two. This arrangement added a great deal of stack space, but it makes it rather difficult to navigate the library since the 3rd floor cross hall does not meet up with either the 3 or 4 East. 3 East is half a flight below the hallway and 4 East is half a flight above.  Picture of doors to 3 and 4 East. 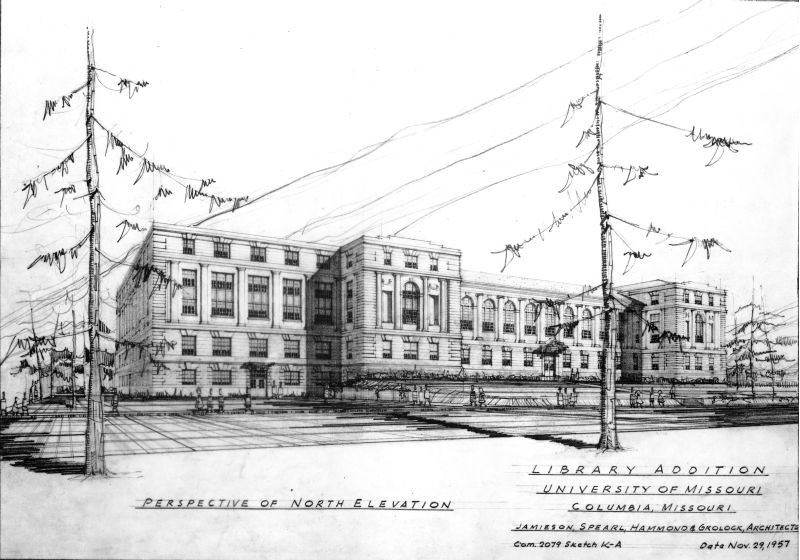 The architect's sketch of the north facade shows how the East Wing mirrors the West Wing.

This is the view looking west from Hitt Street.  The facade is similar to the West Wing. except for the ground floor which juts out to the south beyond the upper floors.  Again, form does not follow function as it did in the West Addition. The large windows on the 2nd floor look like they should illuminate a large room, but they do not. 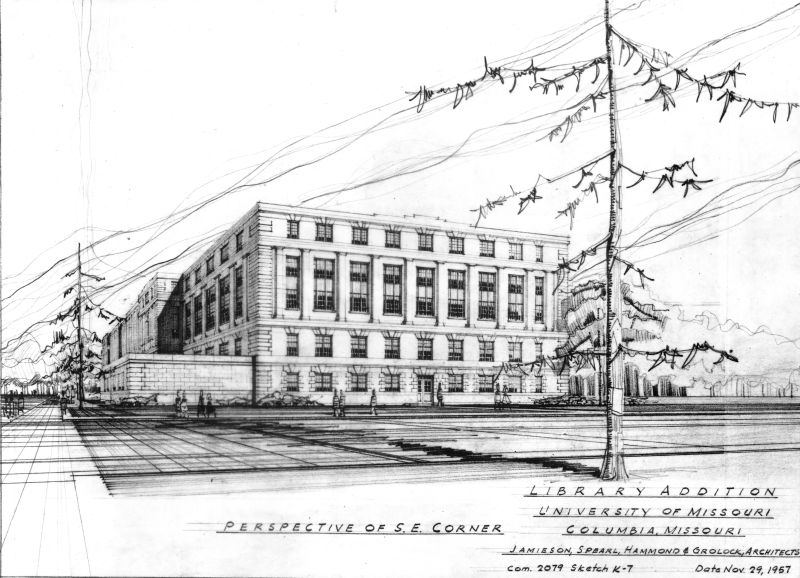 This sketch of the east facade give a better idea of the East Addition.

As you can see, the East Addition looks much like the West Wing, even down to the door in the middle on the ground level. The facade on the east continues to north and south ends and is different than the facade on the north and south of the East Wing. In the 1916 library and the West Wing, differences of style indicated different functions in the building. This is lost in the new construction. The East Wing and East Addition both hold the east stacks. From inside the building you cannot tell where either the East Wing and East Addition begins or ends. The facade is ornamental. 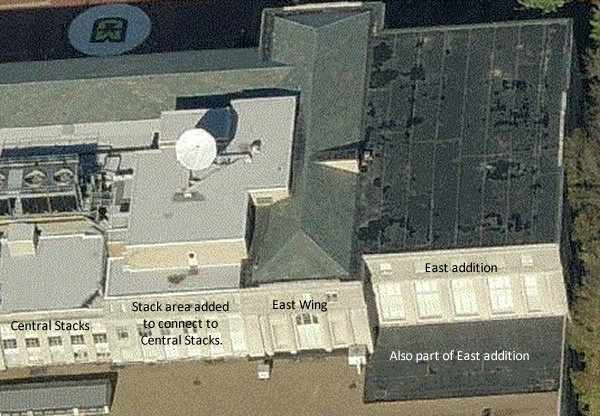 View is looking toward north.  The 1916 stacks (central stacks) are on the far left. The area between them and the East Wing as well as the expansion beyond the East Wing were all added at the same time. The back of the East and West Wing mirror each other stylistically and would have unified the south facade of the building. The South Addition (tan colored roof) added in 1985 blocks most of the older south facade and completely changed the way the building looks.