Columbia, Mo. (March 22, 2016) - Earnest Perry will be the new associate dean for graduate studies at the Missouri School of Journalism, Dean David Kurpius announced today. His appointment is effective July 1.

“Earnest has long demonstrated a passion for developing the talents of master’s and doctoral students,” Kurpius said. “He has an established research agenda, proven administrative abilities and is recognized internationally as a leader in journalism education. We’re thrilled he has accepted this challenge.”

Perry succeeds Esther Thorson, who joined the School as the associate dean for graduate studies and research in 1993.

From 2005-11 and again from 2013-14, Perry served as chair of the Journalism Studies faculty, which oversees the School’s undergraduate core curriculum.

“Dr. Perry is a respected scholar and recognized leader in graduate education on both the campus and international levels,” said University of Missouri Provost Garnett Stokes. “I applaud his selection.”

Perry, MA ’95, PhD ’98, returned to the Missouri School of Journalism in 2003 to redevelop the School’s cross-cultural journalism course. He previously led the news-editorial program in the Department of Journalism at Texas Christian University. While there he helped redesigned both the undergraduate and master’s programs.

His research interests center on African-American press history, specifically the Black Press during the first half of the 20th century. He has published articles on history, cross-cultural journalism education and media management in leading peer-reviewed academic journals including American Journalism, Journalism History, Journalism and Mass Communication Educator and Journalism and Mass Communication Quarterly. He recently co-edited the book, “Cross-Cultural Journalism: Communicating Strategically About Diversity,” with Maria Len-Rios, PhD ’02, from the University of Georgia.

"The Missouri School of Journalism is gaining a steady hand in Earnest Perry,” said Glen Cameron, the Maxine Gregory Wilson Chair in Journalism Research. “His experience as a campus leader and his skills as an administrator in the School are much needed as the campus begins a renewal process after the recent difficulties we have experienced."

Perry’s professional career includes stints as a reporter for newspapers in Illinois, Connecticut and Texas. He has also served as a consultant to news outlets in Texas and Missouri on issues such as newsroom management, reporting in ethnic minority communities, news writing and editing. For more than 20 years, Perry worked with ethnic minority high school journalists in summer workshops in Texas, Missouri and Oklahoma.

“I follow in the footsteps of a tremendous scholar, one of the most successful graduate deans in the School’s history,” Perry said. “We will continue to build on the strong foundation Dr. Thorson established.”

The House voted on Thursday to cut funding for the University of Missouri system following months of criticism from state lawmakers over how the institution’s leadership dealt with student complaints about racial issues on the Columbia campus.

The state budget passed by the Republican-led House cut $7.6 million for the Missouri system and $1 million for the Columbia campus. While this is a small portion of $428.6 million allocated to the system this fiscal year, the state provides about 15 percent of the university’s funding. House Speaker Todd Richardson said those cuts are targeted at administrators, and there’s no reason why they should impact students.

University officials have said a drop in enrollment in the Columbia campus could also lead to a loss of at least $20 million in revenue.

Positions, collections and hours to be trimmed from MU Libraries budget

MU Libraries is planning to cut positions, collections and hours as part of $894,000 in expected budget cuts for the 2017 fiscal year, Ann Riley, director of libraries,  said Friday. 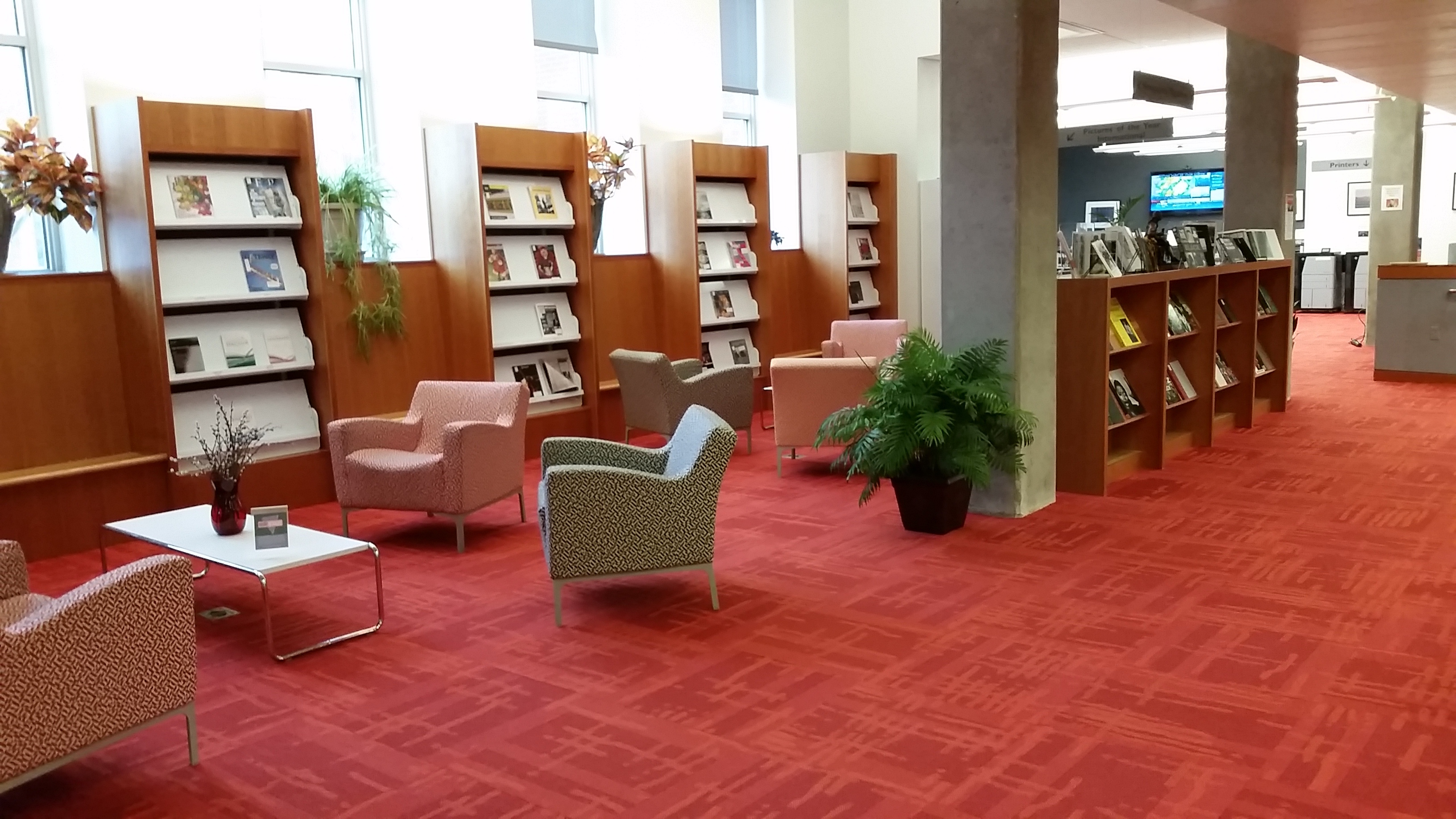 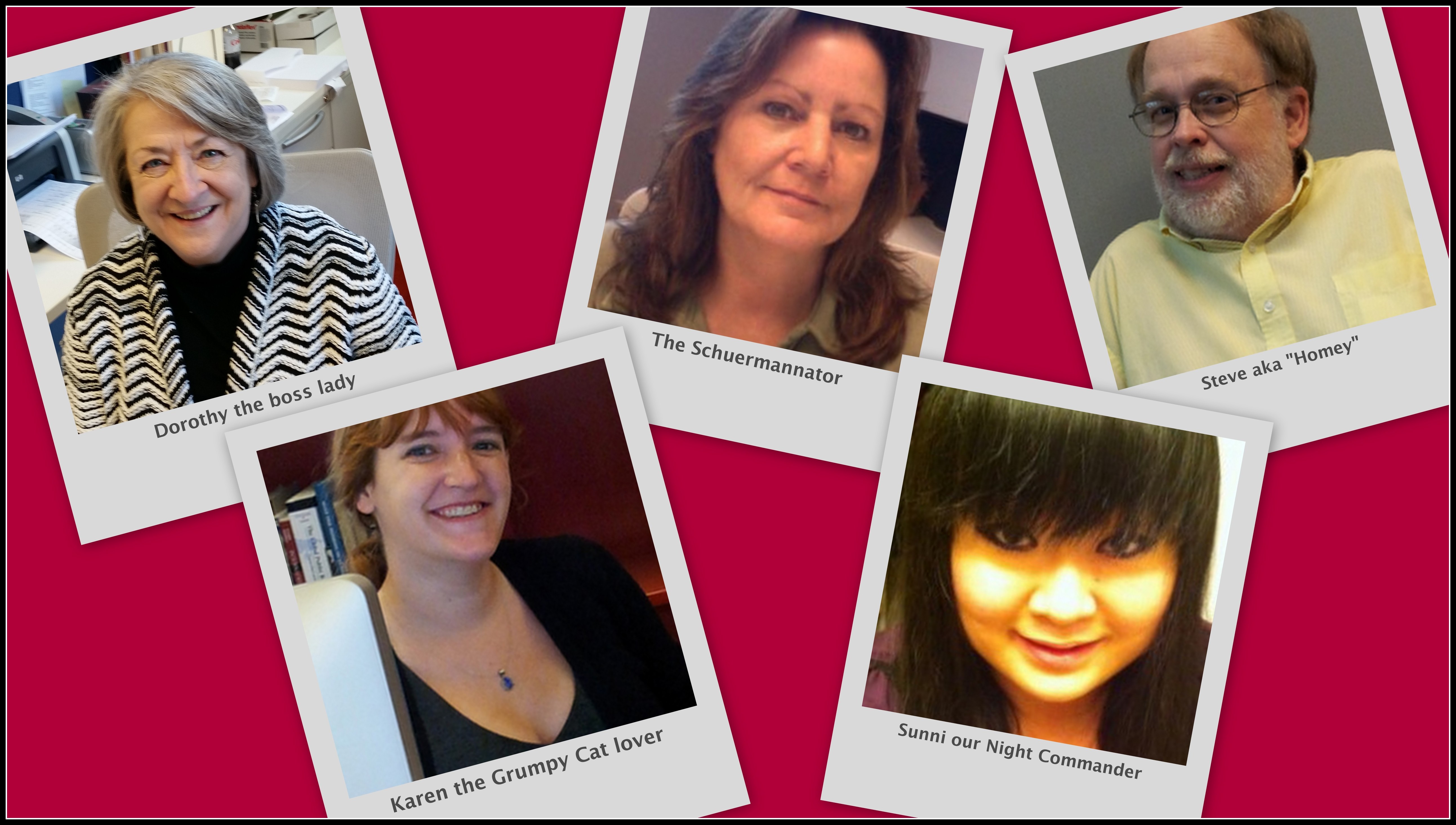 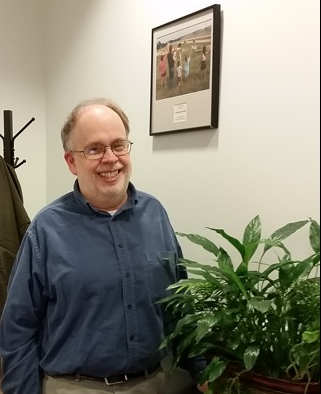 In February of 2016, Steve Clayton retired from the Journalism Library.   His position has not been refilled.

Journalism Library Changes Hours  - Dorothy Carner, Head of the Journalism Library sent out a survey to with four different scenarios for hours for Fall 2016 and the Students picked this one. The results of the survey. 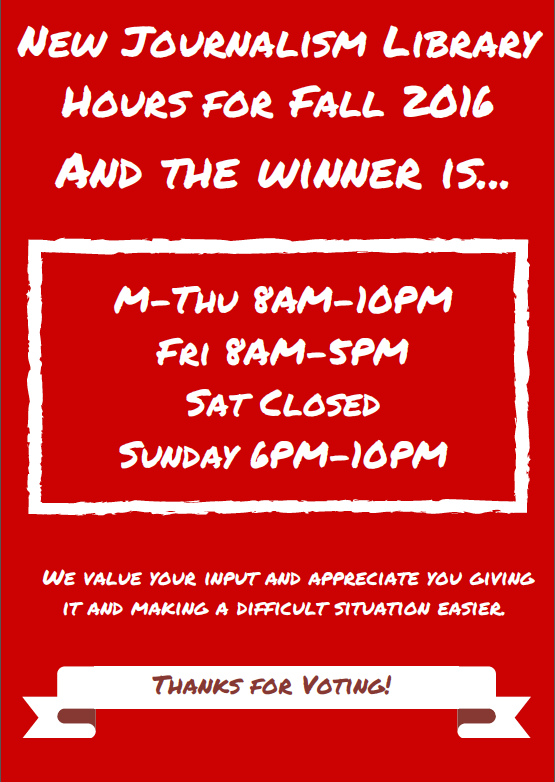 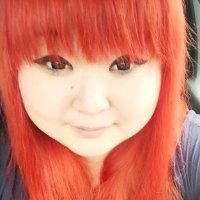 May 2016 - Shengxin (Sunni) Sun leaves the J-Library.  She has taken a GRA position with the International Office.  Her position changes from a 40 hour position to a 30 hour position due to budget cuts. 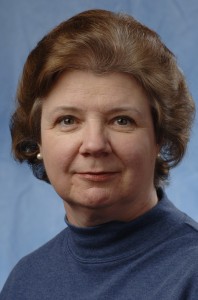 Sandy Schiefer from Ellis Government Documents starts part time at the Missourian Newspaper Library in May 2016. 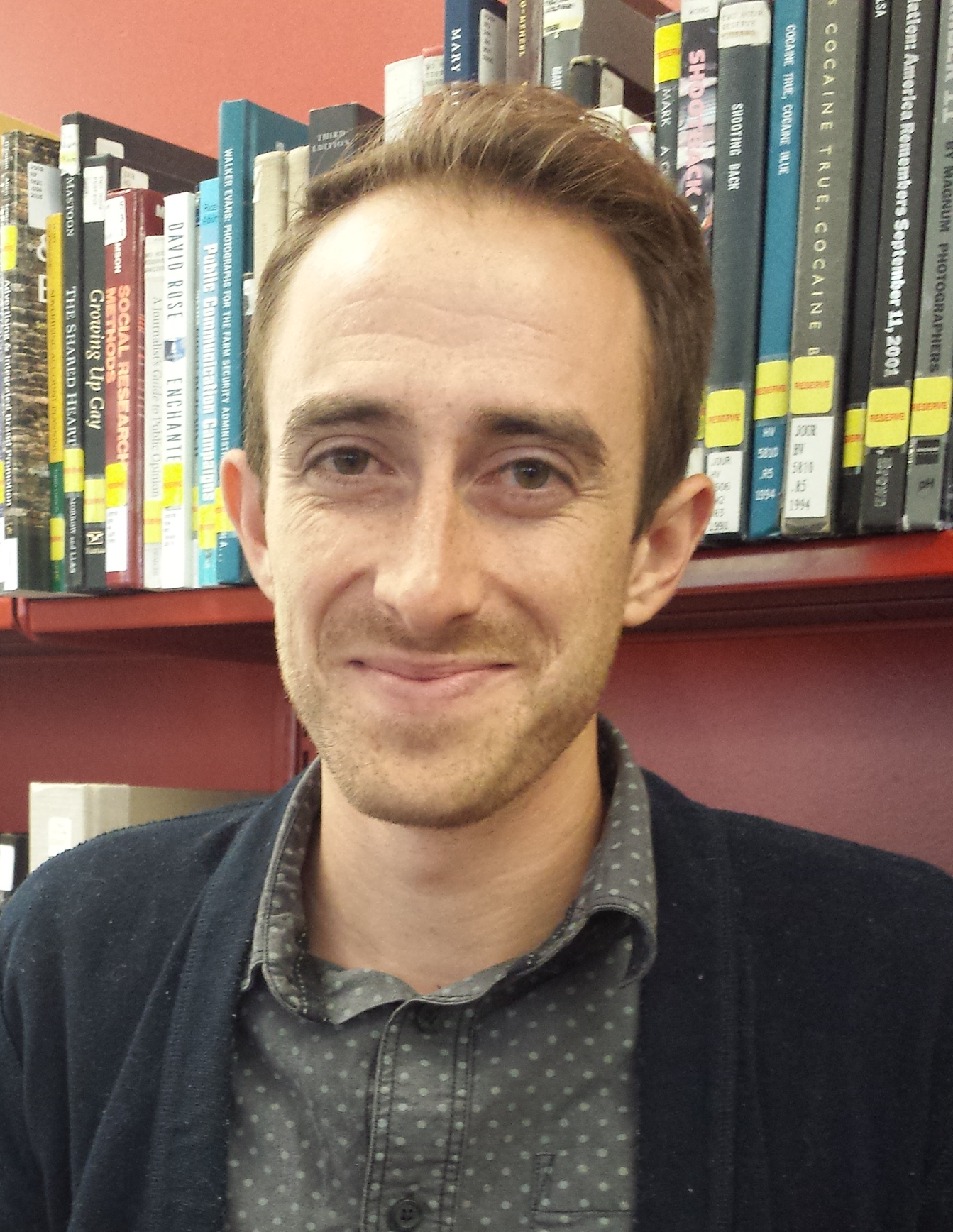 Gary Garrison is hired July 2016 to fill the evening position.

October 2016 - The MU Journalism School has the accreditation team come 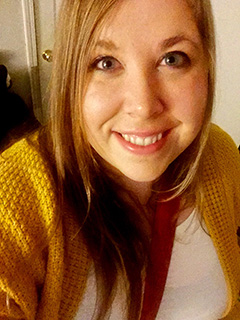 Mary McFillen was hired in January of 2017 to replace Karen Marshall.

Danielle Wilson was hired in January of 2017 to replace Gary Garrison.  Danielle has been a Library Student Assistant at the Journalism Library since 2013.

May 2017 - Neff Hall closes for the summer for replacement of the Neff elevator.  Faculty and staff move into other buildings for the summer.  The Dean's office occupies 101 Reynolds Journalism Institute located within the library.  Other offices are located on the second floor of RJI and Gannett.

June 2017 - MU Libraries posts wish list of books it can’t afford  -  Library officials had a wish list of more than 400 books that they hoped to buy but were not able to because of budget cuts. The most expensive was "Complete and Truly Outstanding Works by Homer," which costs $5,250. The least expensive book on the list was "Another Time, Another Place," by Jessie Kesson, which costs $16.75.

The wish list was posted two weeks ago on the MU Libraries website, which gives willing donors a way to buy specific books for teaching and research.

MU Libraries cut $1.2 million in material costs for fiscal 2017, and was facing about $1.3 million in one-time cuts to its collection expenses in fiscal 2018. 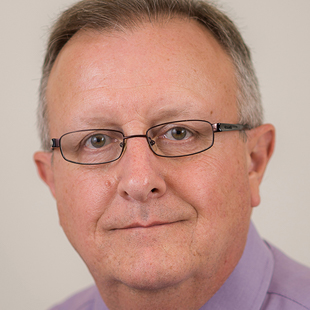 September 2017 -  David and Wendy Novak have committed $21.6 million to the University of Missouri School of Journalism to establish the Novak Leadership Institute. The gift, which was announced today by MU Chancellor Alexander Cartwright, will support the institute named for David Novak, an advertising and marketing executive and renowned expert on leadership, who is the co-founder, retired chairman and CEO of Yum! Brands.

Along with the Leadership Institute there is a dedicated space and the beginnings of a library collection to support the library needs of the Institute. 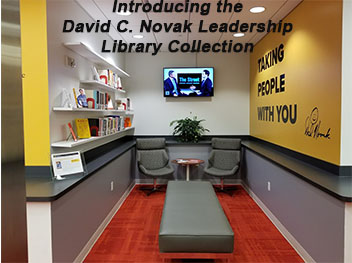 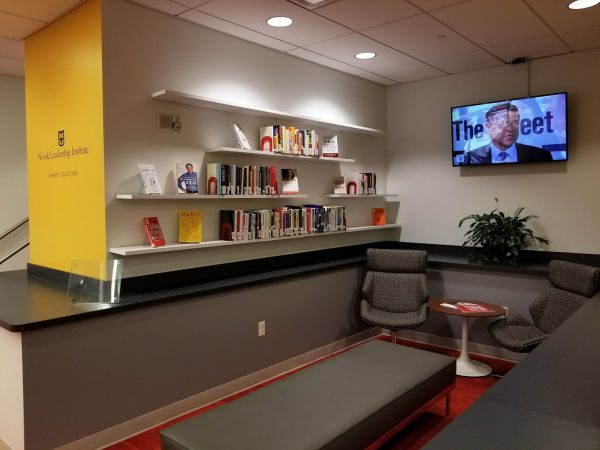 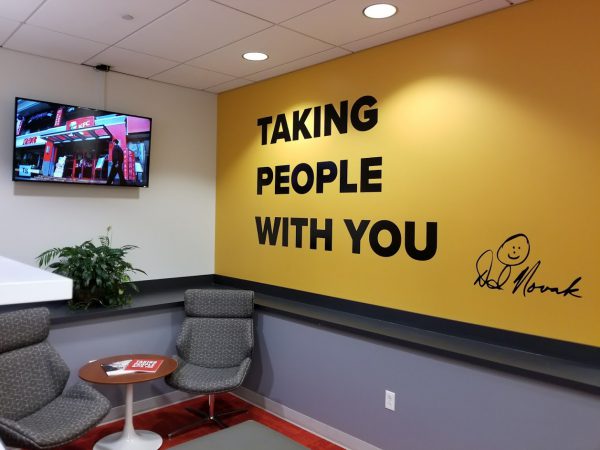 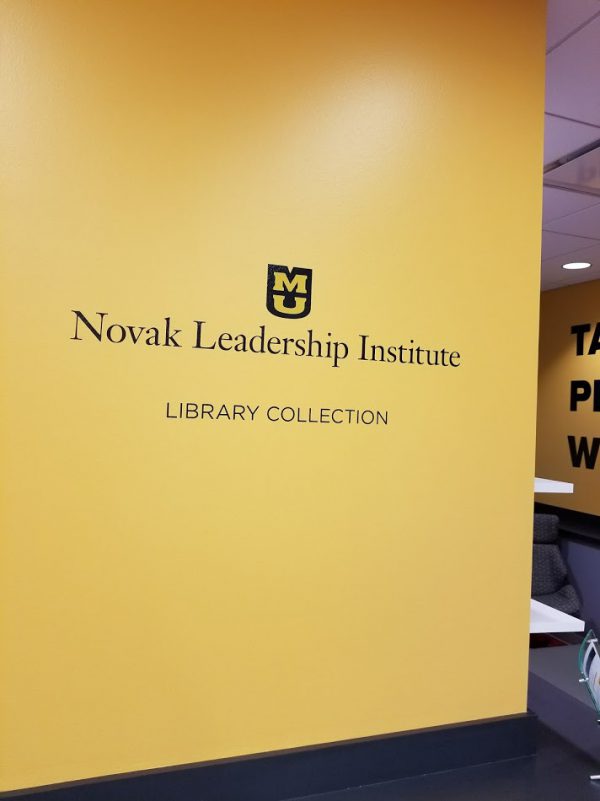 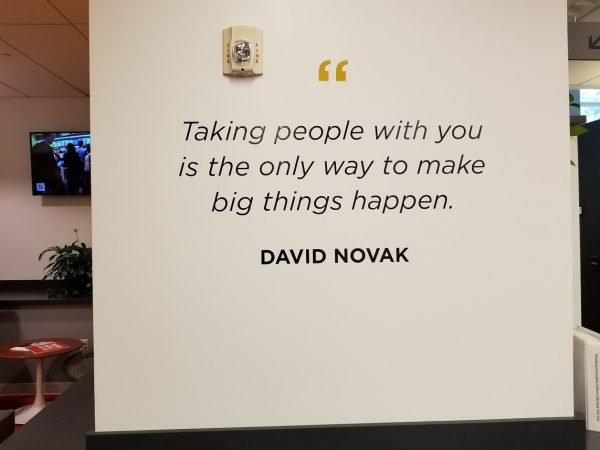 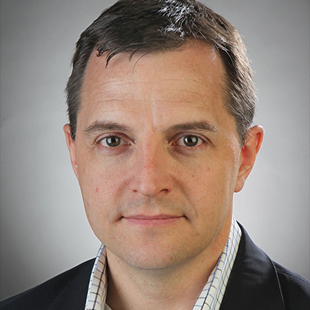 Mary McFillen has left the Journalism Library.   She has taken a position elsewhere on campus. 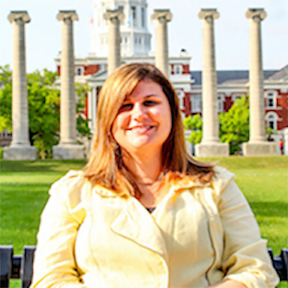 On May 24, the campus had a budget meeting with deans, other administrators, and fiscal officers attending.  All of us learned what the campus decision-makers have planned for unit budgets for next fiscal year.  As we had heard, the Libraries are getting a flat budget, 0% cut.  Most other units had cuts between 5 and 10%.  However, even a flat budget requires us to make some cuts to stay even.  The campus still faces millions of dollars in cuts, primarily because of loss of enrollment and flat state support.  LMT has made the cut decisions for strategic reasons, as we look at maintaining essential services and collections, in response to the increase in online materials use and decline in book purchases, cataloging and use of our physical, paper collection.

With deep sadness and great reluctance, I am here announcing to you all the layoff today of the three staff members in the former Catalog Management area. They have been notified earlier today, and are eligible for University Transition Assistance, which includes one week of pay for each year of service up to 26 weeks, as well as other benefits for their transition period.

RJI has begun replacing furniture in the Journalism Library.  We will be having a survey to find out what types of seating our patrons prefer and start replacing more in the next couple of years.

Chairs donated from Ellis library are replaced in the group study rooms January 2020.

Sam Ediger is hired in December 2019 for the Evening Supervisor position.

July 1, 2020 - Library staff return once a week to scan and deliver articles and chapters of books.  Curbside pick up begins.