Example of a racial restriction in a Columbia, MO warranty deed. This language, though unenforceable since 1949, remained part of the deed that the buyer was asked to sign in 2004. Click on the image for screenshots of other parts of the document. 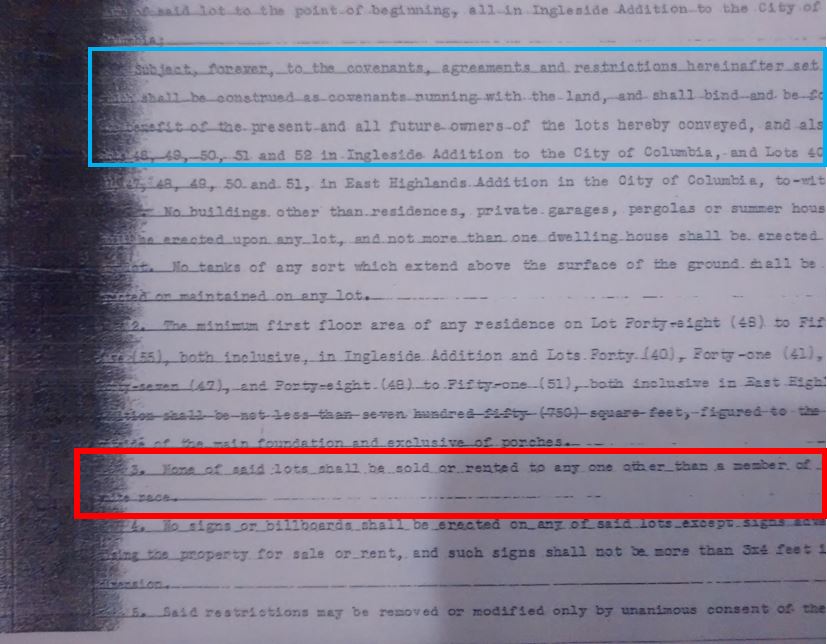 The above deed excerpt was provided by a homeowner in Columbia's East Campus neighborhood.

The legible portion of text in the blue-outlined box reads:

Subject, forever, to the covenants, agreements and restrictions hereinafter set...shall be construed as covenants running with the land, and shall bind and be ...the benefit of the present and all future owners of the lots hereby conveyed, and also...48, 49, 50, 51 and 52 in Ingleside Addition to the City of Columbia, and Lots 40

The legible portion of text in the red-outlined box reads:

3. None of said lots shall be sold or rented to any one other than a member of the white race.

The restriction just after this one prohibits "signs or billboards" on the properties. A similar sentence appears in other deeds, including several from 1930, in which E.C. and Mary Clinkscales are listed as Grantors. In these deeds, "white race" appears capitalized, as "White Race." (Deed Book 190, p. 110, 124, 137, 138).

Other racially restrictive language used in deeds in Columbia include, but are not limited to, the following:

This Deed is made upon the express consideration and agreement between the parties that the premises shall never be deeded, leased or mortgaged to a person of the negro race, and any such deed, lease or mortgage shall of itself be forfeit all the right, title and interest in said premises of the grantor in such instrument, and title to said premises shall forthwith and thereupon revert to and vest in the grantor herein...That the above restrictions are for the benefit of the owners of each and every lot in Western Heights and any person owning any one or more lots in said Addition may bring action to enforce the above restrictions or enjoin any other owners or person from violating same...

Said tract lying outside and west of the city limits of Columbia, MO and subject to the following restrictions: (1) An easement for public utilities four feet in width is reserved across the rear of each lot. (2) No lot or part of a lot shall ever be sold to a person of African descent.

3. From a 1926 deed documenting an agreement between John A. Stewart and the Sigma Alpha Epsilon Club, restricting the use of real estate sold to the fraternity by the Stewart family. Deed book 189, p.287-292.

(e) Said houses so erected shall be used as a dwelling house for Greek letter fraternities or sororities, which may be established at Columbia, MO, and having members attending the University of Missouri. Said houses so erected shall be used for living and dwelling purposes only and no business of any kind, character or nature shall be conducted on the real-estate herein above described. (f) Said premises shall not during the term of this agreement be held, owned or used by any member of the Negro or Jewish race.

The documentation of restrictive covenants drawn up in Boone County is an ongoing project. The list of restrictive deeds found so far is publicly viewable. If you would like to participate in this ongoing documentation project, please contact Rachel Brekhus, MU History Librarian.

Sometimes, it is possible to locate internal city planning documents such as this 1935 City Plan for Columbia, Missouri. In the 1930's in mid-Missouri, at least, racial segregation is visible as an explicit ideology and shared assumption of urban planners and city commissioners.

“The Douglass School, providing both elementary and high school facilities for negroes, is well located to serve this population. A site farther west on McBaine Avenue, held for school purposes, is too near the westerly edge of the area now occupied by negroes, and as previously discussed, there is no reason for this district to expand. The grounds of the Douglass School are inadequate, and should be enlarged to provide not only better school play area, but a general recreation center for negroes….”p.28