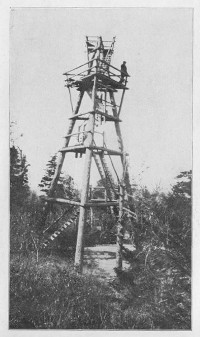 From the State of New Hampshire Biennial Report of the Forestry Commission for the years 1915-1916. 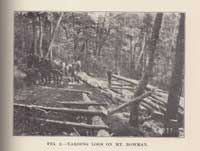 From the State of New Hampshire Biennial Report of the Forestry Commission for the years 1903-1904.

Forest fire material is prominent within the forestry portion of the collection.  Items contain discussions of fire law, prevention, reported fires, cause, damage, regrowth, and effect on crops.  Dry conditions are certainly a cause as they are today, but railroads were a cause for concern as well.  Locomotives were named as the largest fire-starter in New Hampshire in 1903-1904.  Sparks from the smokestacks and hot coals from the ash pan were the main concern.  Prevention of forest fires was given more emphasis than actually fighting the fires.  Firebreaks, cutting wide swaths of land on either side of railroad tracks, and employing look-outs were the main prevention techniques.  Education of the public was another prevention technique.  This took the form of pamphlets, lectures, and one-on-one discussions with motorists in dry areas.

Reports on the logging industry are common in the Forest Reports.  This includes information on the state of logging in various regions of the state, the various industries that use the cut trees, the types of trees available, and the conditions of the forests.  The major lumber industries that made use of the timber were wood pulp, paper, railroad-ties, and lumber.  The types of trees available, the conditions of the forests, and the cutting methods were noted in order to preserve the forests and prevent total devastation.

Forest Reports also contain information on damage to trees caused by various diseases, fungi, tent worms, and parasites.  This information was particularly important because it gave those throughout the state the knowledge to fight pests and problems.  The progressions and locations of problem areas were tracked and recommendations were made on how to relieve the problems.

Reforestation is frequently mentioned in conjunction with areas damaged by fire, logging, or grazing cattle.  Unproductive land was seen as a problem to be dealt with by planting new forests.  Land owners were encouraged to replant by prescribed methods or by redeeding the land back to the government for reforestation.