The Division of Special Collections is located on the fourth floor west of Ellis Library, the main library for the Columbia campus. More information

Special Collections provides a variety of services to MU students, faculty and staff. Services are available to all researchers and scholars not affiliated with the University of Missouri as well. Get started 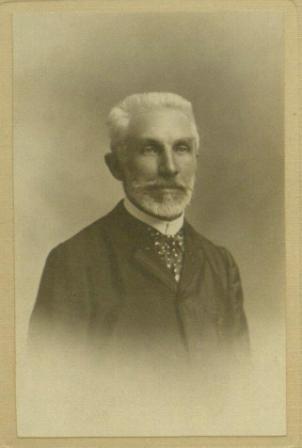 Geoffroi Jacques Flach (1846-1919) was born in Strasbourg, France, the capital of the Alsace region, on February 16, 1846. His family name was originally well-known because of Sigismond Flach, who was the first professor of law at Strasbourg University during the 16th century. Flach studied classics and law at Strasbourg University, where he received a Doctor at Law in 1869. In his dissertation and early writings, he endeavored to explain legal problems through a discussion of history, which was a relatively innovative approach in France.

After the Franco-German War, Flach spent two years rebuilding the museum and library of Strasbourg, which had been destroyed by the Prussian attacks. Because of the military conflict it became necessary for him to choose between his native German roots and his love of the French people and culture. He chose to settle in Paris despite his German heritage.

Flach became the chairman of comparative legislation at the Collège de France in 1884 after having assisted Édouard René de Laboulaye, his predecessor in the post. Flach also served as professor of comparative law at the Free School of Politics beginning in 1877. He published works on a wide range of topics including Irish history, Russian culture, and ancient Mesopotamia. One focus of his research led him to publish a multi-volume work on French feudalism entitled Les Origines de l'ancienne France. Flach continued to study a variety of different matters until his death in Paris in 1919.

Henry Ormal Severance, director of the University of Missouri Library from 1907 until 1937, purchased the library of Professor G. Jacques Flach, which consisted of approximately 6,000 volumes. The purchase of these beautiful books took place in Paris during March of 1920. At the time, Severance was on a leave of absence from the University of Missouri, and while in Europe, he acted as a European representative to the American Library Association. He was also librarian of the American Library in Paris and in charge of libraries maintained by the United States Army.

Severance was able to acquire the Flach collection for the University of Missouri Library at "a favorable price" owing to the poor economic climate in Europe after World War I. The collection was probably bought in two parts, and the total purchase price for the collection was 33,000 francs ($2,400).

Several publications about the collection were produced in the early 1920's. The information culminated in 1923 when university librarian Florence Baxter Currie presented a paper entitled "The Flach Collection of the University of Missouri" at the American Library Association conference in Hot Springs, Arkansas. In the paper Currie discusses the large number of rose catalogs in the original collection. She also includes a description of the Flach collection contents and talks about the library's effort to finish cataloguing the books.

The oldest and rarest materials in the collection were sent to the Rare Book Collection after purchase, with the other books dispersed throughout the circulating collections.

At the time of purchase, the Flach library consisted of around 6,000 volumes, including 150 volumes of cartularies, 21 volumes of ordinances of the kings of France (1723-1849), Les œuvres d'Estienne Pasquier, contenant ses Recherches de la France, two volumes on French history published in 1723, De Re Diplomatica (1709), Les Covstvmes Generales du Duché de Lorraine és Bailliages (1596), as well as many other valuable books. Other tomes include samples of early printing and binding, and a few fine modern bindings, according to a letter from Mr. Severance addressed to the University of Missouri President A. Ross Hill.

Because the library was dispersed into the general circulating collections, the Libraries have been unable to identify all of the books belonging to Flach's original collection. However, over 2,800 books are currently identified as formerly part of the Flach library.