Guide for the Athletic Training Program.

5 Steps of Evidence Based Practice 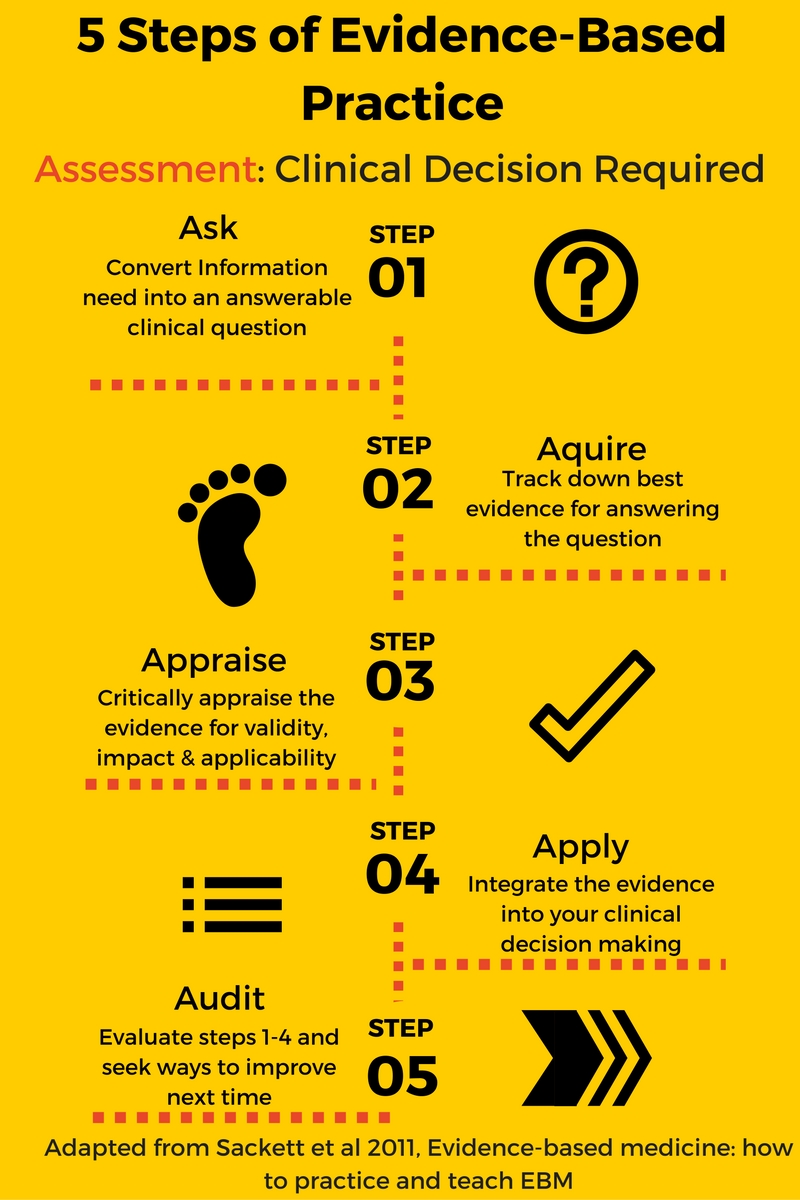 Systematic Review: a review in which specified and appropriate methods have been used to identify, appraise, and summarise studies addressing a defined question. It can, but need not, involve meta-analysis). In Clinical Evidence, the term systematic review refers to a systematic review of RCTs unless specified otherwise.

Meta-analysis: A statistical technique that summarizes the results of several studies in a single weighted estimate, in which more weight is given to results of studies with more events and sometimes to studies of higher quality.

Randomized Controlled Trial: a trial in which participants are randomly assigned to two or more groups: at least one (the experimental group) receiving an intervention that is being tested and another (the comparison or control group) receiving an alternative treatment or placebo. This design allows assessment of the relative effects of interventions.

Cohort Study: a non-experimental study design that follows a group of people (a cohort), and then looks at how events differ among people within the group. A study that examines a cohort, which differs in respect to exposure to some suspected risk factor (e.g. smoking), is useful for trying to ascertain whether exposure is likely to cause specified events (e.g. lung cancer). Prospective cohort studies (which track participants forward in time) are more reliable than retrospective cohort studies.

Case control study: a study design that examines a group of people who have experienced an event (usually an adverse event) and a group of people who have not experienced the same event, and looks at how exposure to suspect (usually noxious) agents differed between the two groups. This type of study design is most useful for trying to ascertain the cause of rare events, such as rare cancers.

Case Series: analysis of series of people with the disease (there is no comparison group in case series).

Users' Guides to the Medical Literature

The Users' Guides to the Medical Literature was originally published as a 25 part series in JAMA between 1993-2000.  Some of the most relevant articles from the series are listed below. The current Users' Guides (2nd edition, 2008) are published as a book (see link to online version below or read the print copy located at MU HSL Reference  WB 39.U845 2008).

© 2018 Curators of the University of Missouri. All rights reserved.
An equal opportunity/access/affirmative action/pro-disabled and veteran employer. DMCA and other copyright information.
Affiliated with MU Health Care and Libraries
1 Hospital Dr., Columbia, MO 65212
Phone: (573) 882-4153 , Contact the Webmaster