An in-house counsel or management-side employment lawyer may encounter this type of research problem.

You have a meeting with client John Riley in half an hour.  John owns a restaurant in Edwardsville, IL, and approximately 16 employees work for him, but most are part-time, college or high school students who work has servers.  John made an appointment with you because he heard on the news a small restaurant owner like himself is being sued by an employee for discrimination based on sexual orientation.  John is concerned because he knows one of his employees, Brandon Rite, is an openly gay man and some of the other workers taunt him and call him names.

John already checked the City of Edwardsville Ordinance and there is no provision prohibiting private employers from discriminating based on sexual orientation.  But John is still concerned, and wants to know if he could be liable under state law.  In addition, John wants to know if he is a "covered" employer since he only has 16 employees.

You do not have much time, so you need to do some quick research to prepare for your interview with John.

The first issue is whether the State of Illinois prohibits employment discrimination based on sexual orientation.  There are two ways you can quickly find state-specific non-discrimination laws.

Option 1: [[Check the Non-Discrimination Laws: State by State Information Map]]  Here, you can easily click on the state of Illinois and find out whether Illinois has any protections for LGBT workers. 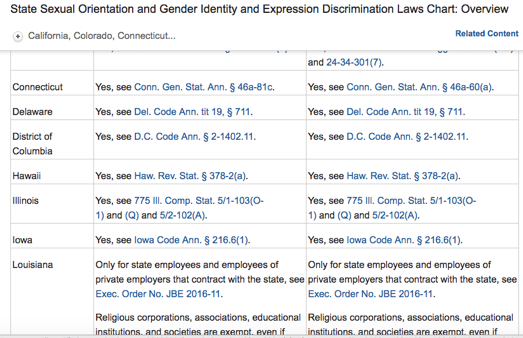 Now that you know it is illegal to discriminate based on sexual orientation, the next issue is whether John Riley is a "covered" employer. He only has 16 employees and most of them are part-time, so you want to know the minimum number of employees required to be "covered" AND you want to know what the basic standard is for determining whether an individual is an employee.

The fastest way to find the required minimum number of employees is to click on [[statute]] provided in the Practical Law chart.  Under the Illinois Human Rights Act, employer means any person employing 15 or more employees.

Because John has around 16 employees, he is probably a "covered" employer.  However, you want to know the basic standard for determining whether an individual is an "employee", since most of John's workers are part-time.  To find a basic overview of this issue, you should look to the [[Employment Discrimination Coordinator]], which tells you that  courts usually follow the common-law agency test to determine whether an individual is an employee.

Now that you know John could be potentially held liable for employment discrimination under state law, "covered" employers must have at least 15 employees, and the general standard for determining whether an individual is an "employee", you are prepared for your client interview with John Riley!

An employment law litigator may encounter this type of research problem.

You are an employment law litigator in Columbia, MO.  Your old high school friend Kurt calls you for legal advice.  Kurt is an openly gay man, and after high school he moved to California to work a big tech company in Silicon Valley.  You thought things had been going well for Kurt until you receive this phone call from

"Hey, you are one of my best friends and I really need your help.  My supervisor has been harassing me for months.  At first he would just call me names like "gay", "faggot", "sissy", but then it got worse.  He vandalized my car and wrote "homo" in spray paint and told all my co-workers I have AIDS and am "diseased".  This week I was up for a promotion, but my supervisor told me I didn't have a shot at getting that promotion.  I have been so distressed, I can not eat, sleep, and am hardly getting any work done.  I was so upset, so I hacked in to my supervisor's computer and read through his private business e-mails.  I know I could get fired for that, but I want to sue and get punitive damages for all the pain I have suffered.  Can you help me out?"

You tell Kurt you are deeply sorry for the harassment he has been enduring, and you will get back to him on what legal claims (if any) he has.  You feel terrible for your friend Kurt, you already know California has protections for LGBT workers, but you are not sure what remedies are available for him.

You are happy to find out that punitive damages are available for Kurt, but you are concerned that his remedies may be limited because he hacked his supervisor's computer and read through private business e-mails.  You are not sure how after-acquired evidence of misconduct will affect Kurt's claim for punitive damages, so you check the [[Employment Discrimination Coordinator]]

You discover the California Supreme Court has held that after-acquired evidence does not completely bar a plaintiff's claims under the Fair Employment and Housing Act (FEHA).  Therefore, Kurt can still bring a claim and seek back-pay as a remedy.  You are now ready to give Kurt a call back and advise him of his potential claims and remedies.